“Those who have their ASC in the 17th degree of Pisces will sing songs with sweet melody. But if Mars is found in that same degree, they will hang themselves with a noose (commit suicide)”.

But let us apply some understanding to what is going on here. Upon reflection of these two sentences, a technique emerged in my mind which I am detailing below by simple example. 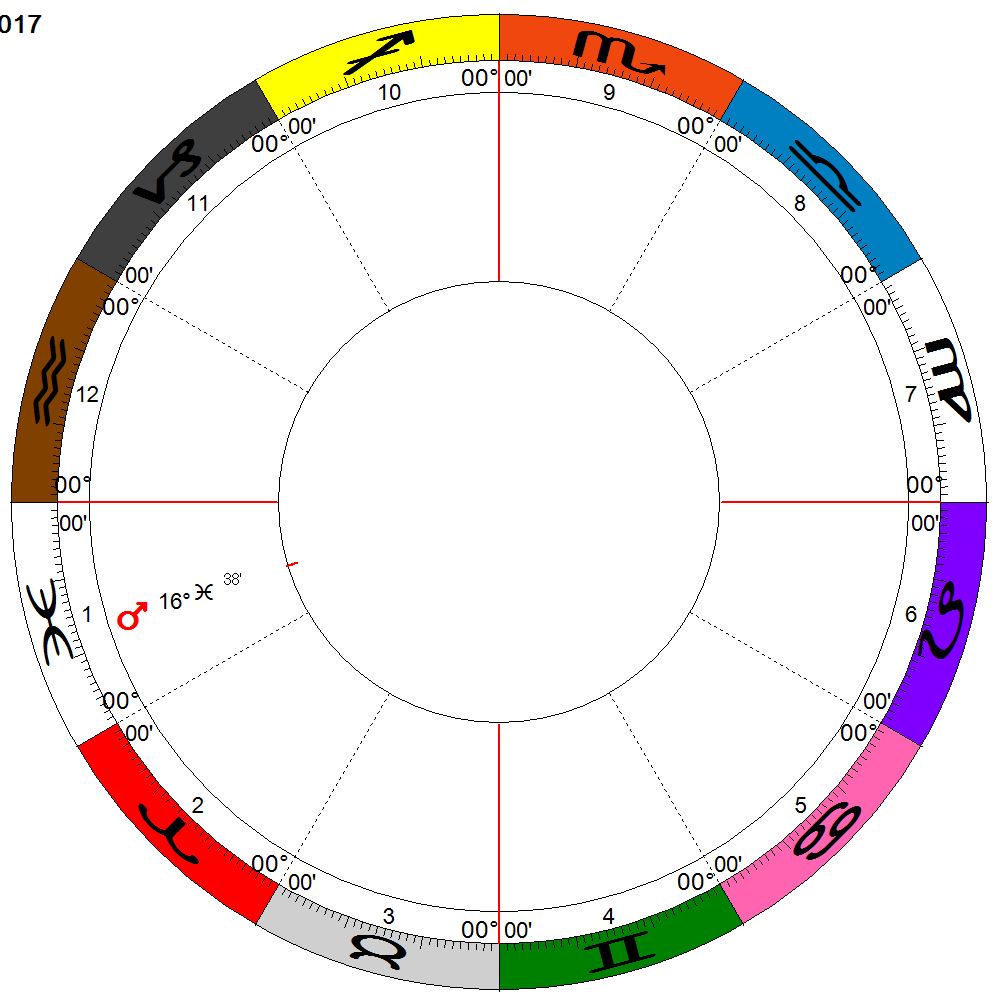 Therefore, for Pisces rising, a general statement with Mars on the AC is that it carries potential signification of bodily harm, debility, or death. A malefic planet in a malefic house will carry the maximum danger of that house, and in this example, Mars carries this signification to the body of the native, the AC.

This is taken further by considering the term ruler (Egyptian terms), who is Mercury. Mercury rules the 7th and 4th house, adding the signification of conflict and endings.

The signification of both the houses that Mars rules and that of Mercury are to be read in the context of the condition of Mars placed in its mirror sign. In this case, this is Libra in the 8th house.

If we now consider the chart of another person with Mars on the AC whom we are all familiar with i.e. Donald Trump, we can apply this hidden technique to the chart and assess if it works.

Donald Trump has late tropical Leo rising, with Mars in the same terms as the AC. Ancient authors seem to have placed great emphasis on the term rulerships.

Let us find the Mirror Sign for Mars on the AC for Leo rising. 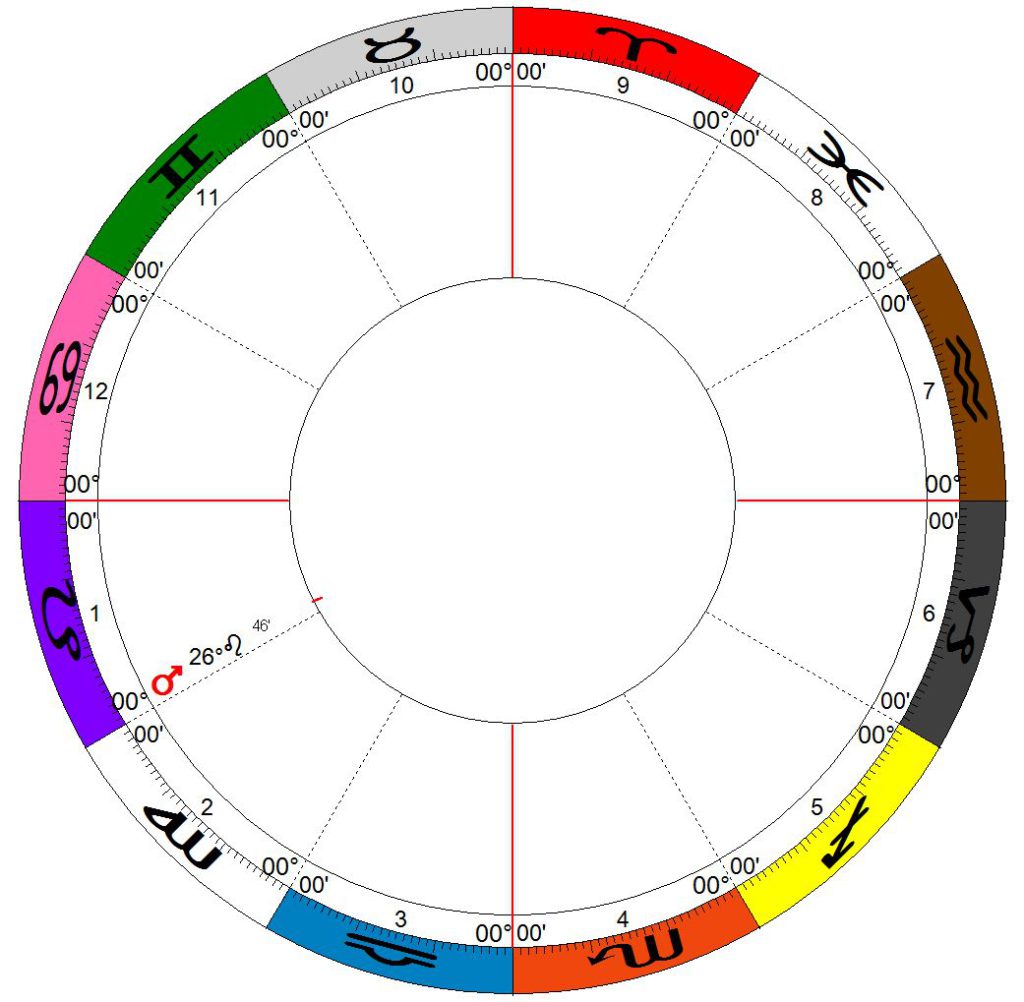 Context: Capricorn is where Mars is exalted. So this is a victorious signification, albeit having stress on the body for sure (it is Mars after all). So, interpretation of the signs pertaining to this technique should follow a more beneficial slant. In addition, the 6th house (where Capricon is placed) is the Joy of Mars. This Mars on AC shows a person who thrives on competition.

Capricorn is the 6th sign from the AC. Success in the 6th sign means: winning contests with others, making successful business deals in one’s favor albeit through dominating others (6th house shows the terms and conditions of deals made in the 7th), success in entrepreneurship and they make a success of risky investments (6th house shows the value of 5th house enterprise), etc.

The term ruler of the AC (Egyptian terms) is Mars itself! With Mars ruling the 4th and 9th places, this Mars on AC can show an ability to determine the terms of property deals made abroad.

Having said that, having the 6th Lord on the AC will inevitably chip away at one’s health, and being exalted in the 6th sign, this Mars on AC shows that the magnitude of mental strain increases dramatically (or shows itself in dramatic ways) as the magnitude of workload increases. Such a person would need an appropriate outlet in order to maintain stamina and mental faculties at their peak.

The Mirror Sign technique provides a key to interpret any planet on the AC by first conditioning its significations based upon its placement in the Mirror Sign.

The Mirror Sign technique can be extrapolated to investigate the actual results of any planet in any house, by using that house as an Ascendant. The technique also shows the effective use of Term rulers in interpretation.

This technique can be very helpful in narrowing down a range of significations possible for a planet emplacement by knowing that planet’s condition in the Mirror Sign of the house under investigation.

Those familiar with Jyotish will immediately appreciate the similarity of this technique to that of Aruda padas (of graha or bhavas) as a means of fine tuning interpretation of the actual results a placement will give.

1) Count from the closest sign ruled by the planet under investigation to the planet itself.

2) Count this many signs from the other sign the planet rules, in the same zodiacal order. In the case of a Luminary, count from itself.

4) Use the Mirror Sign as context for interpretations of the planet under investigation. This helps to narrow interpretation from a large range of possibilities.

5) The term ruler of the planet being investigated shows by its placement etc something about the external manifestation or environment in which all of the above may manifest.

I’ll demonstrate this by more examples: 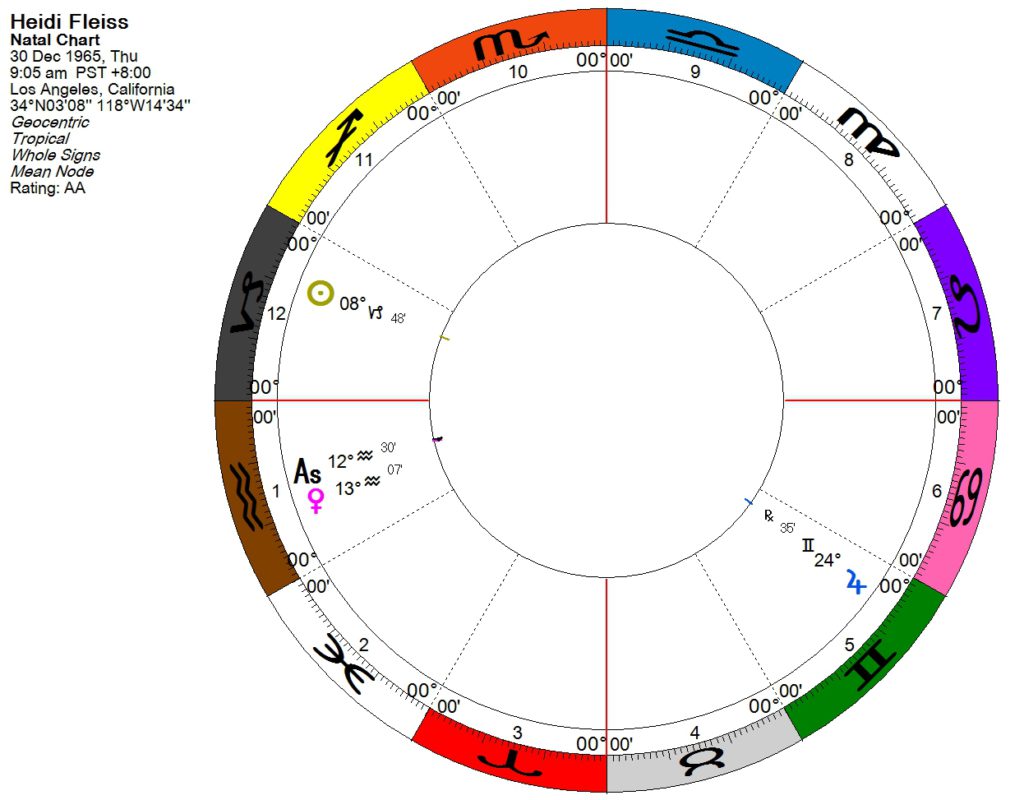 Here we are investigating Venus (using the rising sign for sake of convenience). Venus is placed 10 signs away from the closest sign Taurus. Hence the Mirror Sign to interpret this Venus is 10 signs from the other Venus sign Libra, which brings us to Cancer.

Context: Venus in Cancer (sign of the Moon) in a diurnal chart will reflect the signification of groups and associations and networking (triplicity dignity) but in unusual way. The term ruler of Venus is Jupiter, who is placed in the 5th sign from Venus, showing the signification is unusual connections or associations in sexual or hobbies context. Venus associations in the 6th house Cancer indicate women in service (among other things).

Result: Heidi Fleiss an American former madam, and also a columnist and television personality regularly featured in the 1990s in American media. She ran a prostitution ring based in Los Angeles, California, and is often referred to as the “Hollywood Madam” (source Wikipedia).

In this chart, we are investigating the signification of Jupiter on AC, which one would normally laud.

Jupiter is placed 9 signs from Sagittarius. The Mirror Sign is therefore Scorpio (9 signs from Pisces).

Context: Jupiter is placed in a nocturnal chart, and hence functions in a way that is not appealing to the norms of society (my definition of Sect). Jupiter rules the natal 8th house, and Mars is placed 8 signs away from the Mirror Sign of Jupiter. This is a clear Martian and 8th house vibe for this Jupiter. Jupiter is its own term ruler, bringing in the 5th house signification which, in the context of 8th house-strong emphasis would be a risk-taker. 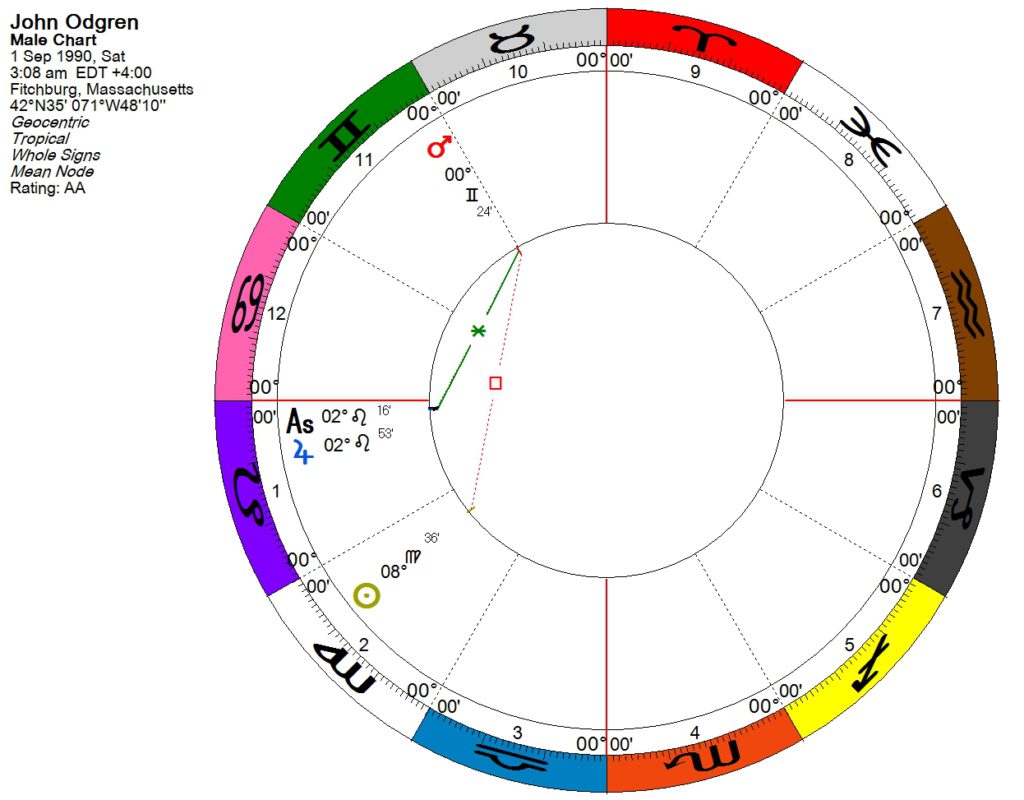 On January 19, 2007, 15-year-old freshman James Alenson was stabbed to death with a knife in a high school bathroom in a hall adjacent to the East House area. The school was put into lockdown twenty minutes after the event at around 7:20 in the morning. The first news reports came out around 8:35 a.m., and the event was highly publicized. The students were sent home at 10:20 a.m. Emerson Hospital stated that Alenson was pronounced dead at the hospital at 8:12 a.m. Sixteen-year-old L-S student John Odgren, a resident of Princeton, Massachusetts, was charged the same day with “murder, assault and battery with a dangerous weapon, and carrying a knife onto school property”. Odgren, who was held without bail after his arrest, was a special education student who had been diagnosed with Asperger’s Syndrome. He had no previous record of violence. His defense was insanity from the Asperger’s, but on April 29, 2010, he was found guilty of first-degree murder and sentenced to serve the mandatory life without parole sentence the next day. He has entered automatic appeal by law. He lost his appeal and is currently serving life in jail. (source Wikipedia)

Here we are assessing Saturn in the 1st house. Saturn is 4 signs from the closest domicile Aquarius. Hence the Mirror Sign is Aries (4 signs from Capricorn). 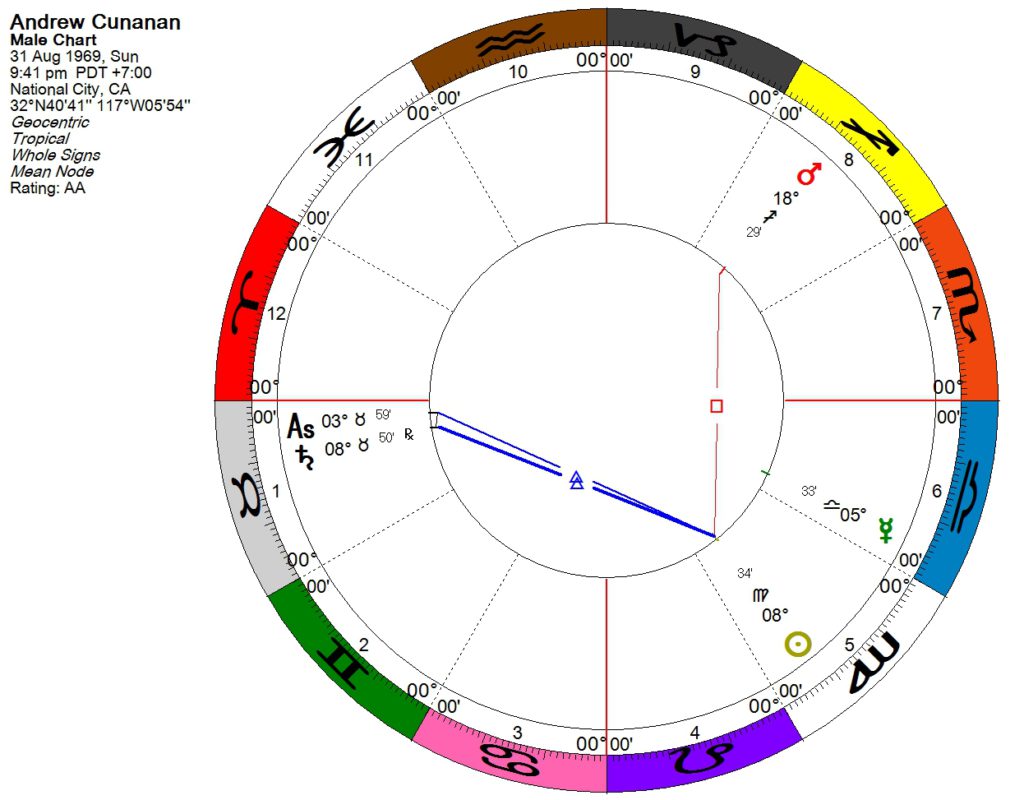 Context: Saturn in Aries in the 12th house in a nocturnal chart is about as malefic an influence as one could get. The ruler of the Mirror Sign is in the 8th house as well. The term ruler of Saturn is Mercury (Egyptian terms). Mercury is placed in Libra in the 6th house. The context of a cadent Mercury given the context of 12th and 8th house vibrations, is a charmer or trickster at work, or mental illness. The signification could find expression in Libra 6th house manifestation.

Andrew was an American serial killer who murdered at least five people, including fashion designer Gianni Versace, during a three-month period in 1997. On June 12, 1997, Cunanan became the 449th fugitive to be listed by the FBI Ten Most Wanted Fugitives list.

Interesting that his last murder was the founder of the famous clothes fashion line, Versace. Perhaps this is the Libra signification of the term ruler coming into play. Authorities also noted the ease with which he was able to change his appearance to avoid detection (trickster, appearance Libra).

Here we are looking at the special case of a Luminary, the Moon. 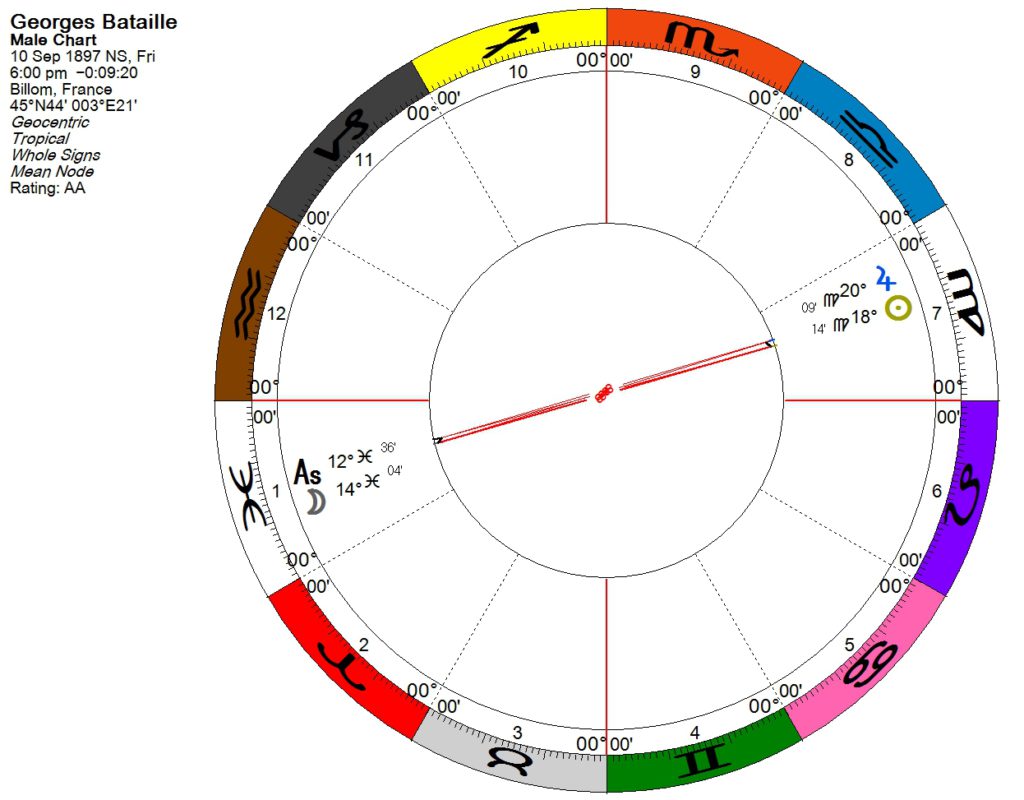 Context: Moon in Scorpio in the 9th house indicates the rejection (Fall debility) of a belief or view of the world (9th house). Saturn and Uranus are conjunct in the 9th house (supporting the breaking down of an outdated view and the portrayal of things in a new light). 9th house also indicates publishing.

The term ruler is Jupiter, who is in analytical Virgo and who rules the 10th house. This indicates that the Moon will manifest through public writings or critique, and their career. Jupiter is combust, which can indicate either lack of recognition for his work or lack of financial benefit therefrom.

Founder of several journals and literary groups, Bataille is the author of a large and diverse body of work: readings, poems, essays on innumerable subjects (on the mysticism of economy, poetry, philosophy, the arts, eroticism and notably post-structuralism). He sometimes published under pseudonyms, and some of his publications were banned. He was relatively ignored during his lifetime and scorned by contemporaries such as Jean-Paul Sartre as an advocate of mysticism, but after his death had considerable influence on authors such as Michel Foucault, Philippe Sollers, and Jacques Derrida, etc. he was an atheist (rejection in 9th house). (source Wikipedia).

I like how the signification of Moon being rejected in the 9th house showed his publications being rejected/banned/scorned, as well his own rejection of religion.

This is an example using the Sun. What is the Sun producing in this chart? 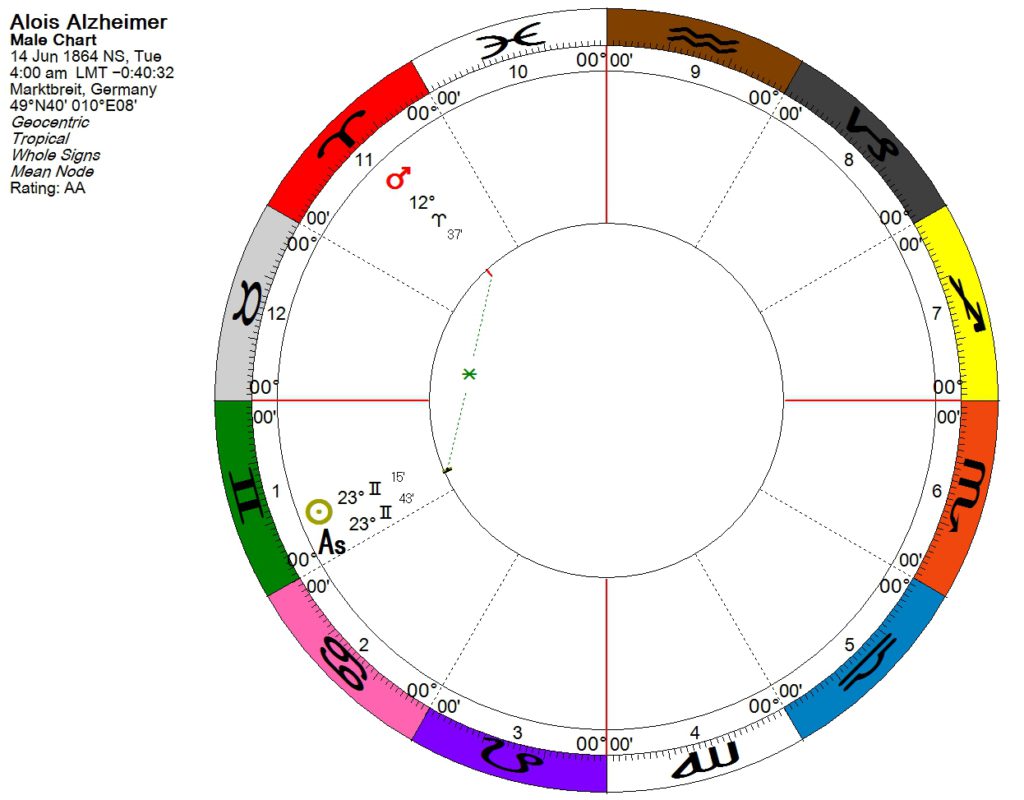 Context: the Sun is exalted in Aries. This indicates that the Sun in this chart will assuredly give fame and increase in rank. Any interpretations should lean toward more favorable significations. The term ruler of the Sun is Mars, which is placed in the Mirror sign and is in domicile dignity. This shows the Sun producing results that are lasting. Mars rules the 6th house also indicating this is the result of his investigative work into the inner workings of psyche (Scorpio on 6th house in this context is great for research).

Alois was a German psychiatrist and neuropathologist and a colleague of Emil Kraepelin. Alzheimer is credited with identifying the first published case of “presenile dementia”, which Kraepelin would later identify as Alzheimer’s disease.

The Mirror Sign technique provides a key to interpret any planet on the AC by first conditioning its significations based upon its placement in the Mirror Sign.

The Mirror Sign technique can be extrapolated to investigate the actual results of any planet in any house, by using that house as an Ascendant.

The technique also shows the effective use of Term rulers in interpretation.

This technique can be very helpful in narrowing down a range of significations possible for a planet emplacement by knowing that planet’s condition in the Mirror Sign of the house under investigation.

1) Count from the closest sign ruled by the planet under investigation to the planet itself.

2) Count this many signs from the other sign the planet rules, in the same zodiacal order. In the case of a Luminary, count from itself.

4) Use the Mirror Sign as context for interpretations of the planet under investigation. This helps to narrow interpretation from a large range of possibilities.

5) The term ruler of the planet being investigated shows by its placement etc something about the external manifestation or environment in which all of the above may manifest.