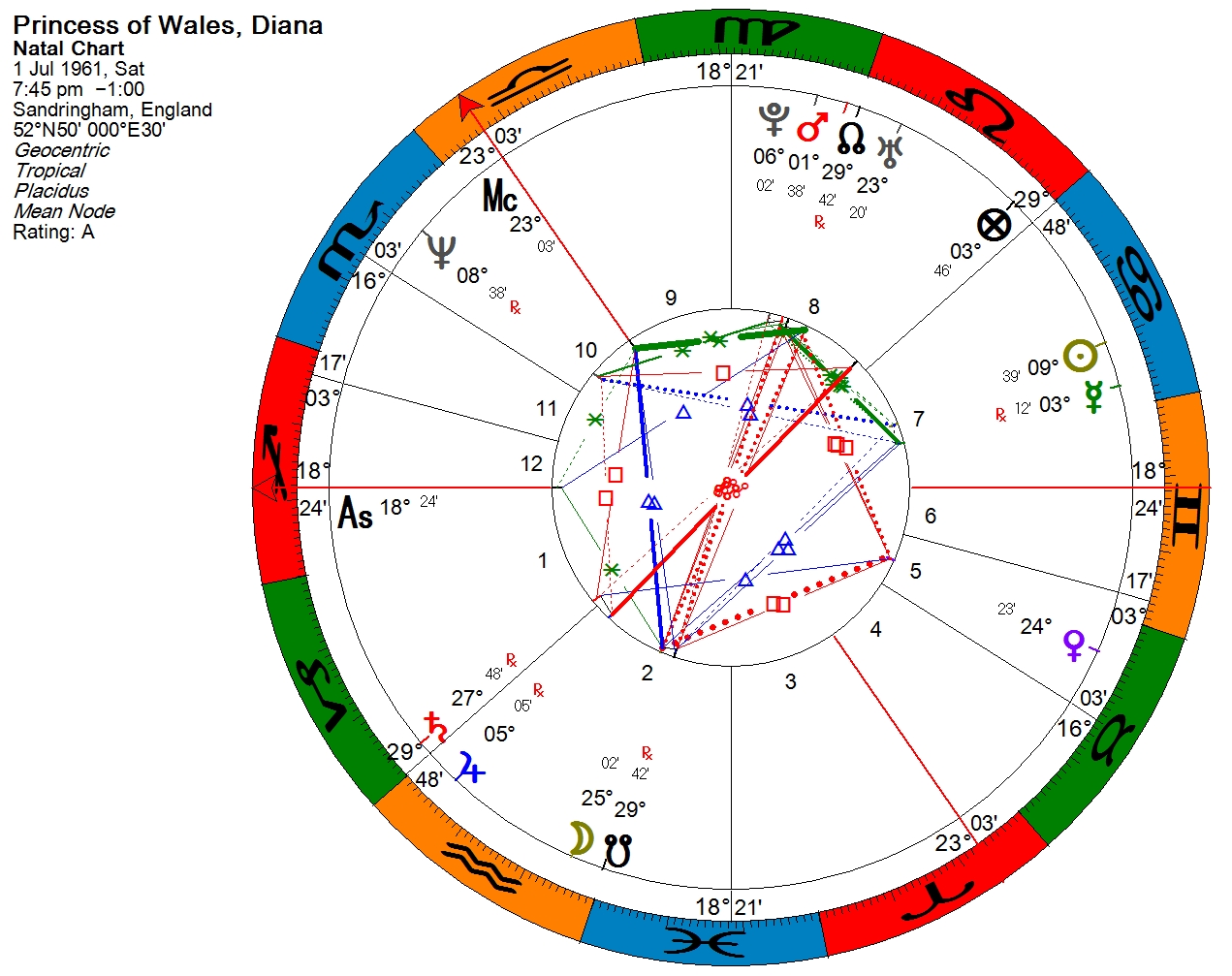 Prediction of death is not an easy affair and a very grave (pun not intended) issue to be treated with utmost respect and sensitivity. The following is a textbook example for the sake of illustration only. In all sensitive predictions, we have to allow for some leeway in birth time in terms of minutes or seconds that would correspond to months in “real” time as well. I am only discussing the aspects of her natal chart that are pertinent to the time we are looking at.

The Part of Fortune is Hilaj. Jupiter is Kadhkudhah. Jupiter is succedent, Retrograde (minor affliction on its own), with the conjunction of Saturn reducing by 29.55/3=9.85 years due to its dignity. Hence gives Median years = 45.5-9.85=35.65 years (March 1997). We can say that until March 1997 the years of life will partake of the vitality indicated by the Hilaj. After this time, the life force is vulnerable.

In 1997, the profected Ascendant comes to Sagittarius, making Jupiter the Lord of the Year in addition to the Solar Return Ascendant Lord. It also means that the natal promise is reflected in the year, which is in her case the experience of personal restriction and self-undoing with involvement of her speech and media or travelling locally (Jupiter ruling the 1st, 12th and 3rd). In the Natal, the Moon rules the 8th house of death, and Jupiter rules the 1st house of life. At about 4am the morning of 30 August 1997 there was a primary direction of the Moon to Jupiter.

Since she died shortly after her birthday in 1997, we should look at the chart for the year 1996-1997 to understand contributing factors on the ground in her life personally. 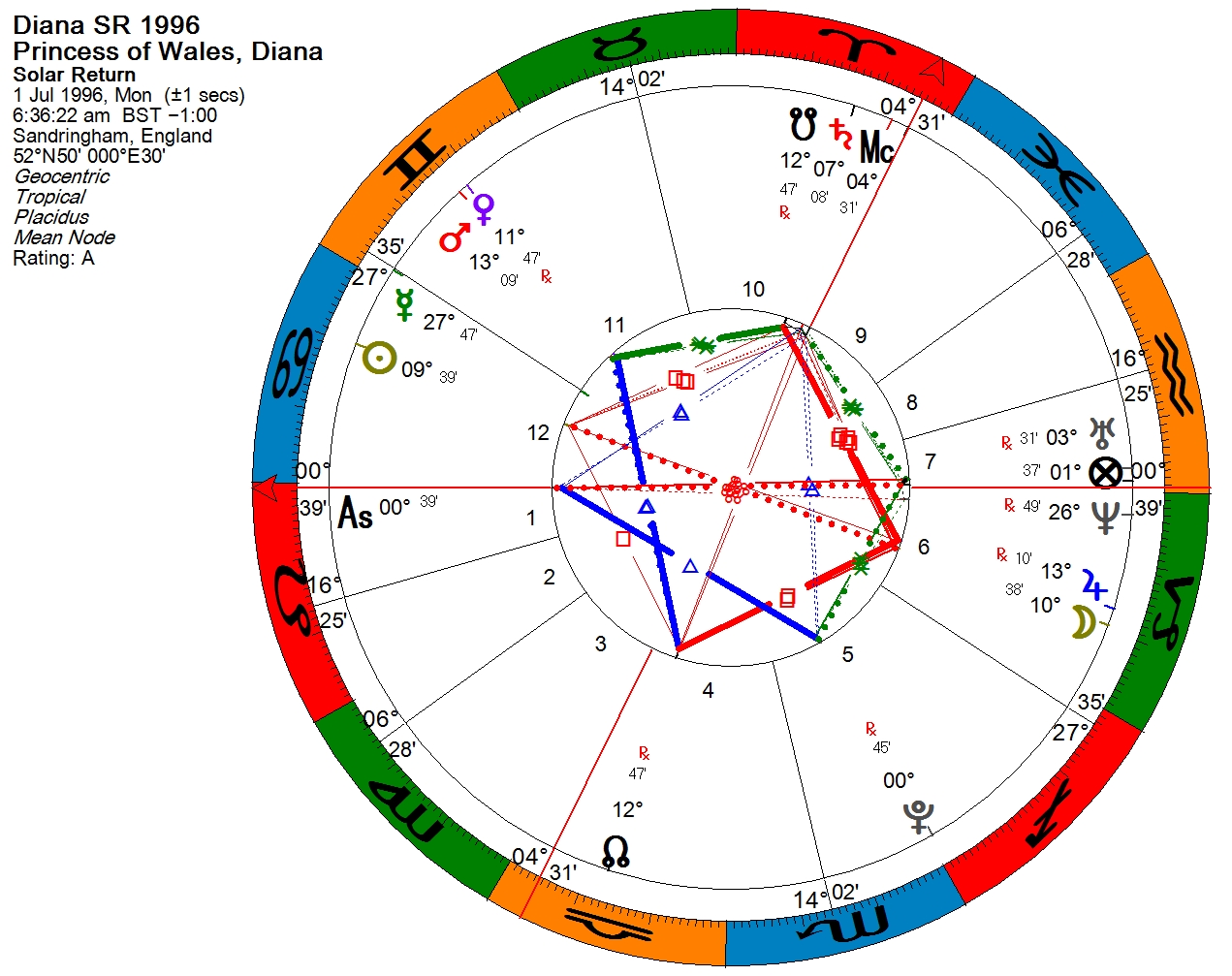 The 1996 chart has much emphasis on malefic houses in life. The Sun ruler of the 1st is in the 12th house, signfying that her own actions lead to despair, or that she willingly adopts activities of isolation from public, its basically someone who doesnt want to be seen.

The Sun also rules the 2nd house so there is also a financial impetus to this, she is seeking financial freedom wants to be recognzied for it (Leo, Jupiter in 6th). Since we have already highlighted the importance of Jupiter and the Moon, I note the Jupiter-Moon conjunction in the 6th house of the year (hard work, illness) in Capricorn, which means both these planets are debilitated. Jupiter rules the 6th and the 9th, and is in the 6th. The Moon rules the 12th place and is n the 6th house. This indicates hardship and self-undoing and travel or foreign people involved in the backdrop of finances (natal 2nd house). AND they are fated as these planets are at the Bendings, whatever activity they denote, it is placing a strain on the home/reputation axis.

The reputation is one of being a rebel (Saturn in Aries 10th house), due to her pleasure seeking or risk taking activities (natal 5th sign). This fall from grace (Saturn in Fall) is coming from the company she is keeping (Mars-Venus in Gemini – this is her natal 7th house of marriage, which is relevant I suppose given all the conspiracy around her death). I’ll not comment on that any further. Complicit is her partners during the year as well – Saturn ruling the 7th and 8th in the 10th – she did die with her partner and it was a very public matter.

Mars being the Lord of the Year, brings the natal 11th house 12h sign into focus – friends among whom she is restricted. The 12th from the 12th finds the MC in Libra, with Venus in the Taurus 5th house, indicating her luxurious pleasure seeking activities are functioning under the umbrella of self-undoing or because of a personal sense of just wanting to be alone or isolated through those activities.

We would look into more details to other methods.

In the 1997 chart, we have angular and hence strong malefic planets (Mars in the 1st, Saturn in the 7th), so we dont expect relationships to be very smooth at all.

Once again, we see the joining of the 7th (partner) and 8th (death) houses (both Aries) with Mars in the 1st – these things approach her bodily and quickly (cardinal signs), and these are debilitated malefic planets so they will give the worst possible situation and everyone will know about it (they are angular).

I note that the natal Hilaj-Kadhkudhah aspect (Part of Fortune opposite Jupiter) is repeated in this solar return chart (in the same signs too!) – that stands out. The Moon with Algol approaching the Pluto opposition from the 9th house of foreign places is also concerning (Moon ruling the natal 8th of death is placed in foreign land in the year chart, with interaction of separation with powerful media/local travel).

Sun is angular in the 10th, so she will be recognized for her caring and mothery nature (Cancer). She was definitely globally mourned and recognized as an international caregiver.