Most natal astrological work and commentaries focus primarily on the individual – a person’s career, financial, relationship, and other aspirations and probabilities of fulfillment. However, we know that whatever affects the planet we will have to face directly or indirectly, first as a common group of human, then as localized communities or nations, then as cities and regions, then as families, and finally as individuals. The one astrological symbolism speaks to all these levels of being and is not beholden to any one person. Our individual lives play out with our familial patterns as a context and reference point. The astrology of Family Dynamics brings a higher wisdom and level of truth to lend
perspective to any life aspiration or issue that presents itself in an individual birth chart.

The history of family is fascinating and instructive. After World War II, the concept of the sentimental and nuclear family went through significant changes. Women suffrage movements arose as a by-product of the working-class environment. People developed a fascination with cross-cultural exchange as the world opened, and both families and communities had to resolve how to move forward given new cultural interchange, especially with the advent of television in the 1960s and 1970s. The concept of family as we knew it was being informed from multiple points of view with some developing a fear of losing cultural significance and individuality in an ever-opening community and world environment. In some ways, individuals aspired to assume responsibility for the direction in which the world – their world – was going. Subsequent generations rejected the “me
vs the world” view of their parents, and the concept of “custodian of the world” came in.

These children would grow up to project family drama onto the world stage, finding it easier to connect with the “earth family” rather than the biological one. Their strength is bringing healing into the families, from the ground up (even literally), and grounding the intent of their parents in a more practical view of the world.

This view in turn came across as overly idealistic to their children (born in the 1970s and 1980s) who, being faced with a truly connected global environment, found that the ideal relationship is not working, it requires hard work and mutual understanding because individuals are not perfect or identical and are bound to be fraught with difficulties related to widely different points of view. They had to understand how to incorporate and accommodate a plethora of views in partnerships and family relationships. These parents would naturally either cling to the “ideal relationship” view of their parents, and seek to fulfill it through their children, or rejected the “ideal relationship” view completely, embracing unconventional and unbound relationships, leaving their own children with no strong examples of properly functioning family or partnership dynamics.

These children would be born in an environment w herein the world is facing its dark side, and similarly in the home, these children develop a keen sense of the dark side of all relationships. The rise of the HIV /AIDS epidemic and associated stigmas, posed a threat not only to humanity, but it struck the deeper level of family as w ell. These adults embraced the darker side of life, and are not afraid to live in it because it is their awareness of the hitherto taboo that walks with it and transforming or destroying the family unit going forward.

The side effect of embracing the darker realities of our lives and family systems, is that we find ourselves encountering the issue of belief and faith and its role in the world and family structure. This can range from a truly intercultural physical, emotional, and philosophical exchange coming into the family life, or the opposite centered around xenophobia and isolationism in those family systems and who are striving to resist the pressures of globalization on our very way of thinking. We see these playing out in the world as well as manifest in families today.

The children that are being born now, will be those who realize that the establishment systems set up at during World War II are simply not working, and their future will be focused on dismantling the same, so that a new establishment and societal hierarchy can take its place. We expect these children to be born with this uber-practical approach to their life, and they either view the world and family as their “little empire” which must be throw n into the world to survive, or their approach is to do away with family and make something of themselves in the world independent from family altogether – to be an empire unto themselves.

These general statements reflect the symbolism of the astrological Pluto – the symbol for destruction and transformation. Pluto, being the god of the Underworld speaks to those issues in the world which, when funneled into the small family unit by personal connection in a c hart, play out in extreme ways. But Pluto is also the caretaker of souls, and as such the Plutonic individual in the
family brings the greatest opportunity for the family unit to care for each other and transcend the lower aspects that may have been swept under the carpet through generations of the family history. Understanding this side of Pluto and its role in your family structure, will help you to break the macabre aspects of its effects and shift them to a more transformative and vitally healing perspective.

In a similar way, the significations of Neptune and Uranus in the chart can be further focused toward establishing the global context within which the life of a child is situated, and it becomes instructive to understand the connections to Pluto, Neptune, and Uranus in the charts of family members to understand how these influences are received by and expressed through the family line. 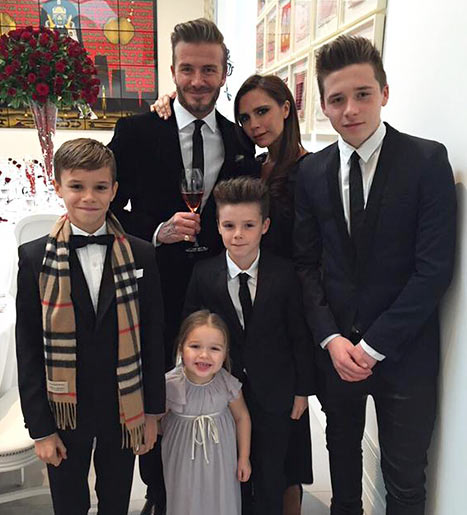 Recognizing Family Patterns can be as complicated as the astrologer wishes it to be. Some patterns only emerge when one looks at Midpoints, for example. However, in this article, I will keep things very simple. There are primarily four main ways in which Family Patterns tend to emerge.

1. Sign Emphasis. This can point to important stories and mythologies which the family unit aligns with. It can be very helpful in identifying problems and solutions.

2. House Emphasis. This can show you what sort of activities individuals in the family can do to connect with one another. Empower them with a positive view about these houses.

3. Planetary Emphasis. Here it is helpful to keep in mind the condition and aspects of the planets. Family members with repeating patterns can understand (and help) each other work with that planet.

4. Tahran’s Top Tip: If there is no birth time, look at the chart from the Moon. This is helpful as the Moon will show the chart symbolism in the context of family needs. It is interesting that sometimes even the charts of pets show strong connections to a family’s themes.

Now let’s apply some of this to the family of David Beckham. 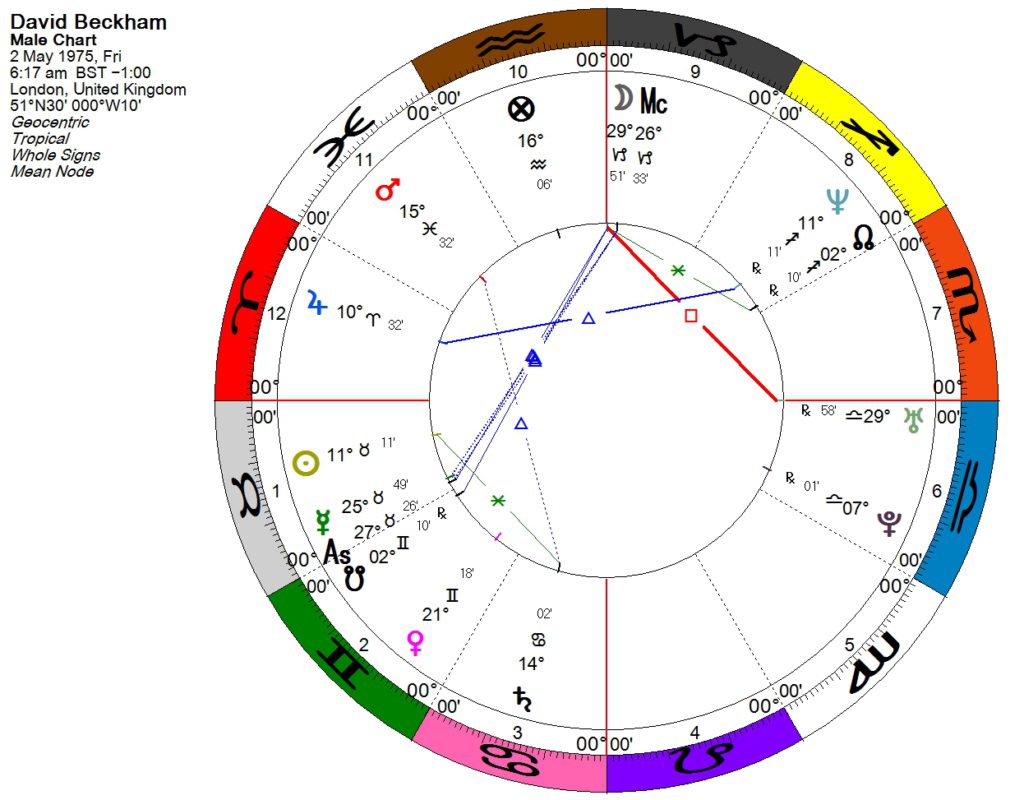 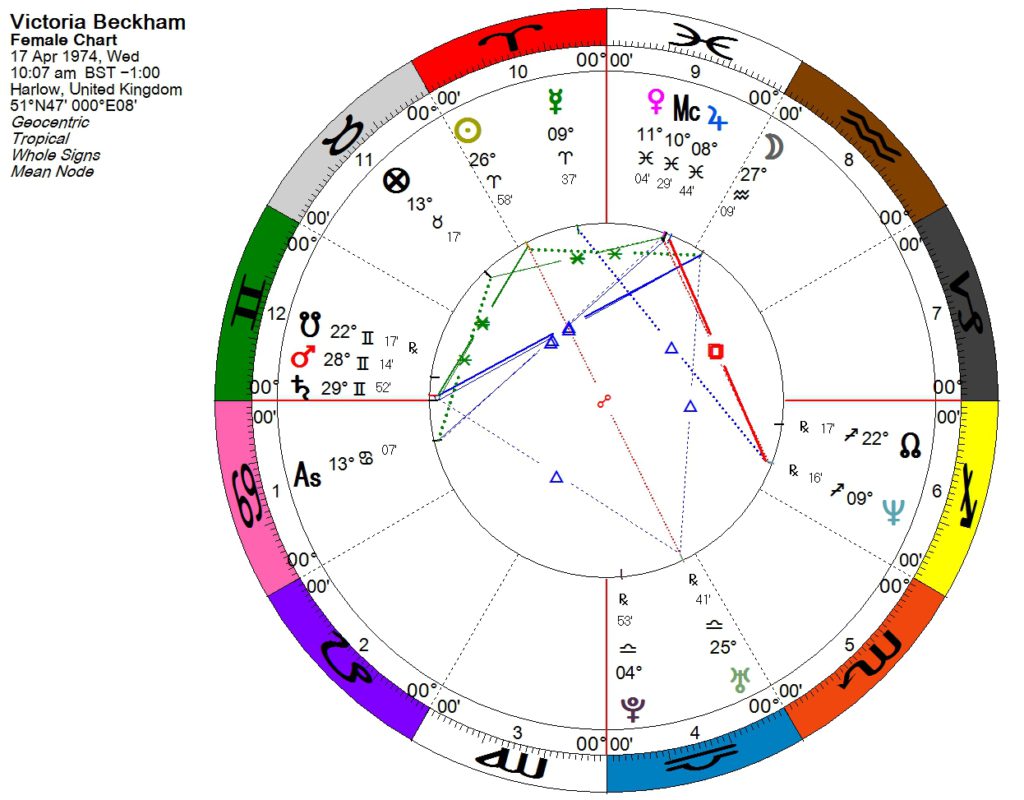 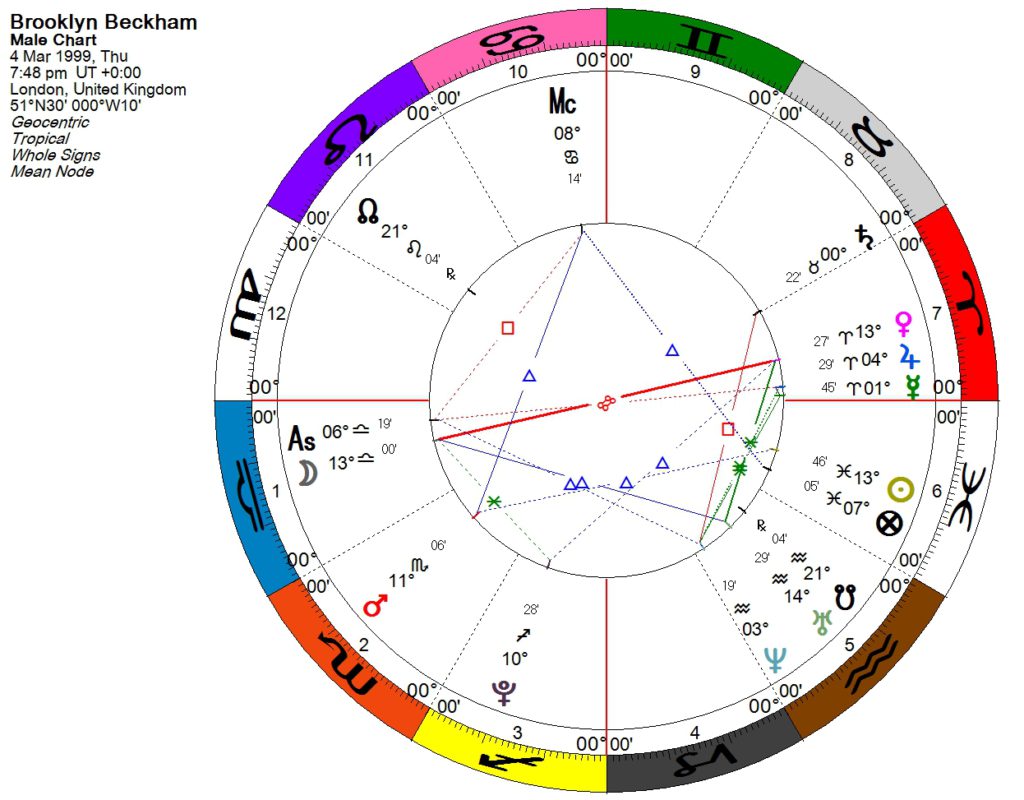 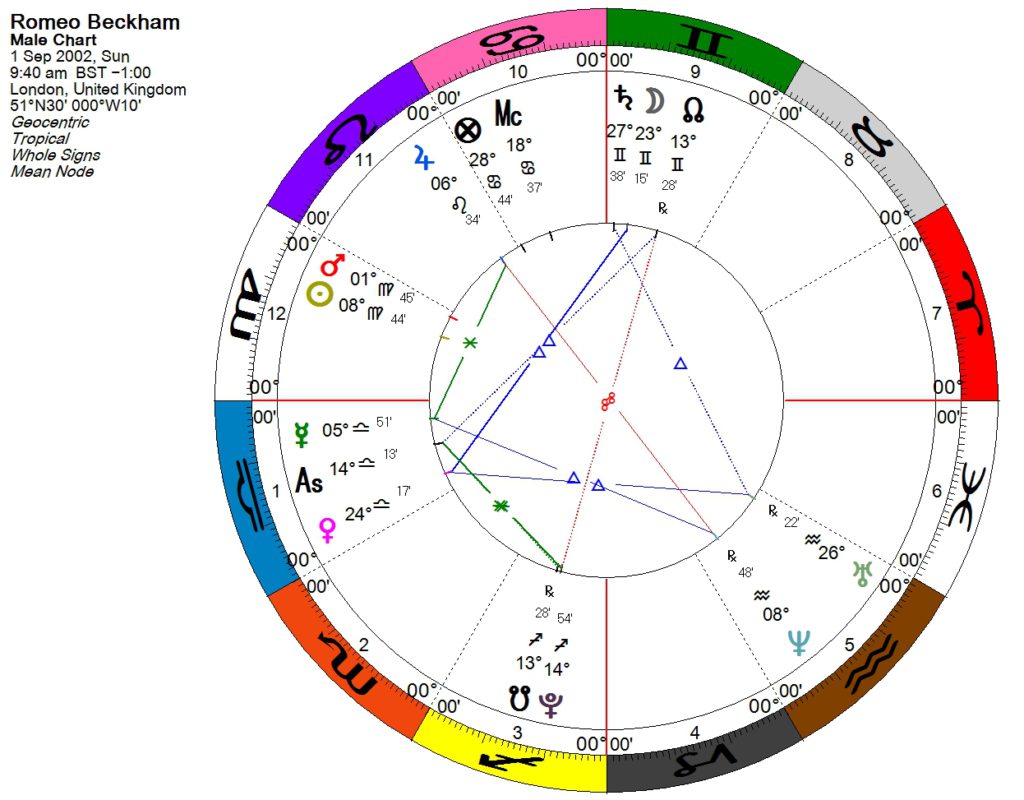 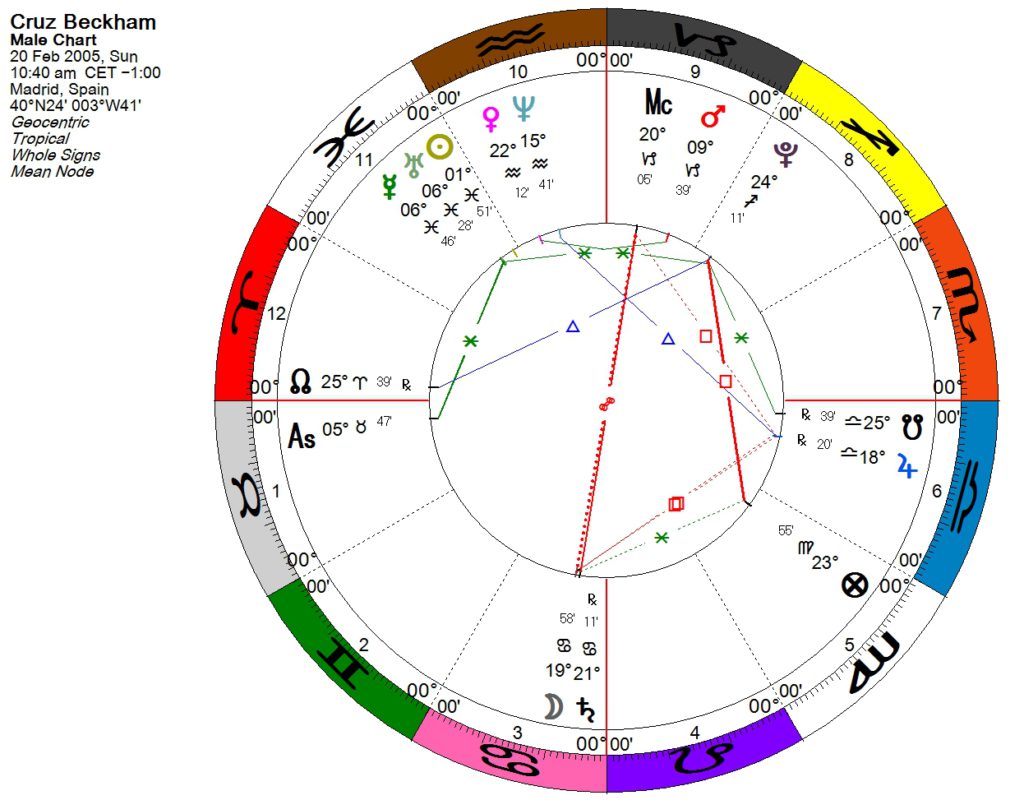 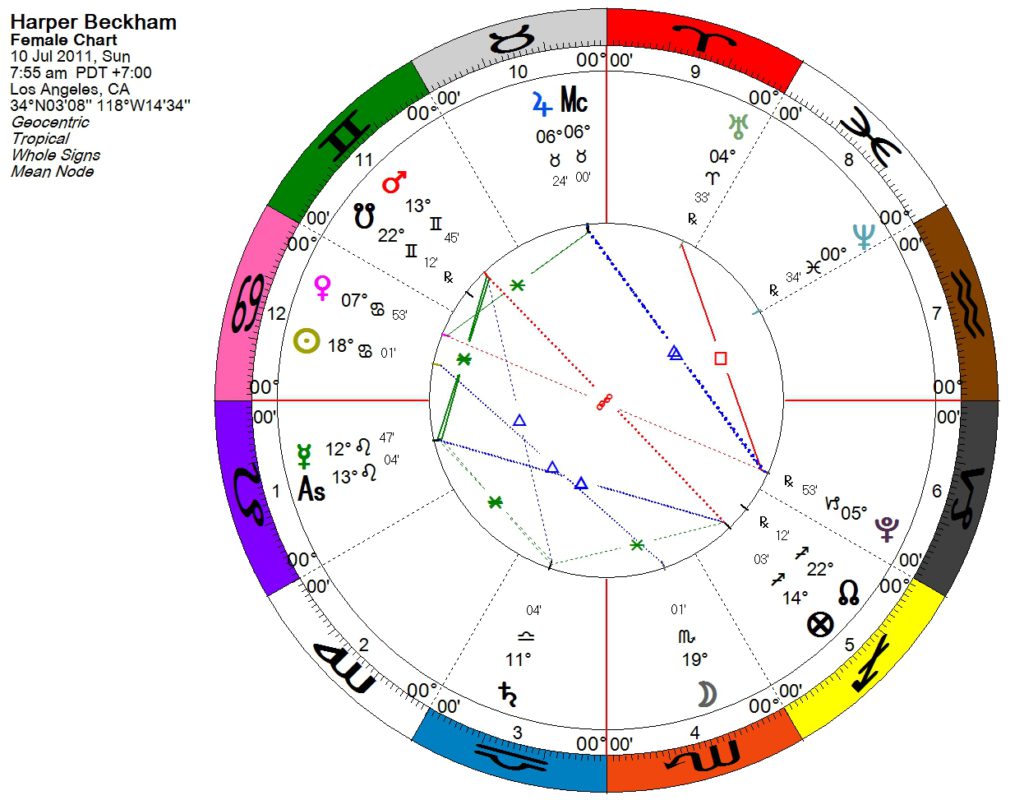 Look at the Ascendants, its Ruler, the Luminaries, and their Rulers, and the Midheaven. There is a strong feminine theme in these charts, which is emphasized around the water and air signs. This is both a connected and yet active family group. They may fall into a Neptunian family archetype (explained in the webinar), with a strong feminine influence running through the family and which motivates family members to explore the world but always within and returning to the family hub. You can see this quite clearly by looking at the MC of both parents, where the feminine is emphasized but where there is also a proximity of a Saturn-ruled Moon. Of course, when looking at the charts of such a large Neptunian archetype family, we expect there to be deep and strong connections between the charts.

Both David and Harper share a Mercury on the AC, indicating that Harper is being born at a time when David would be more settled and willing to communicate more through his family and with Harper in particular. With his Moon on the MC it may be that he feels a need to protect and nurture her, as Harper is the only female child produced in this strongly feminine family theme.

In terms of career drive, Brooklyn and Romeo may look to their father as a role model for discipline as part of achievement (David has Saturn in their 10th houses). It is part of Victoria’s Cancer life path as a matriarch to provide the nurturing and heart that would inform her sons’ career and public roles (her AC is their MC). They also both have Neptune in the fourth house. With these influences, I would expect a certain chivalry character to be prominent as part of the larger family Neptunian theme manifest in both boys.

There may be some division issues within the family, as the first two children (Brooklyn and Romeo) share the same angles, compared to the others, and this may reflect the fact that Cruz and Harper were not born in the British Isles. This is emphasized by Cruz’s stuffy Moon-Saturn conjunction in Cancer on the IC of home and family life, and Harper’s Scorpio Moon in the 4th house. Cruz in particular may be overwhelmed by family archetype overload and if he is not given his space he may become the “black sheep” of the family. But he actually is the custodian of the family group and may manifest the darker side of the Neptune Family Archetype: the lack of individuality consciousness and opportunity for experience.

We looked at the many interesting inter-relationships of astrological symbolism of the whole family in the webinar on Family Dynamics. For example, one of the key placements that was discussed is the prevalence of Jupiter-Neptune contacts present in the charts of all members of this family:

We explored all of these and more techniques in the webinar on Family Dynamics, going in-depth into the stream of patterns throughout the whole Beckham family. You can purchase the recording of this fascinating webinar together with the full workbook here.

If you can find out more information on the specialized Family Dynamics consultation with me here.