Now that we know who is President of the USA, the chart of Inauguration can be interpreted more meaningfully away from too many speculative comments. Please note that if for any reason a new President is sworn into office, the indications in this chart will be discounted.

The heliacal setting star is Acumens, the star in the Sting of the Scorpion constellation, showing the need to face challenges, or difficult/hostile situations and the very concept of such battles fuels greater combativeness. It is not an easy cycle of action, and difficult to stop once triggered. It is an excellent energy to face one’s deepest fears which have been swept under the rug for a long time. It is appropriate for a nation living through its Pluto Return. The star rises, showing that this energy colours the nature of activity of the administration increasingly as time goes on. 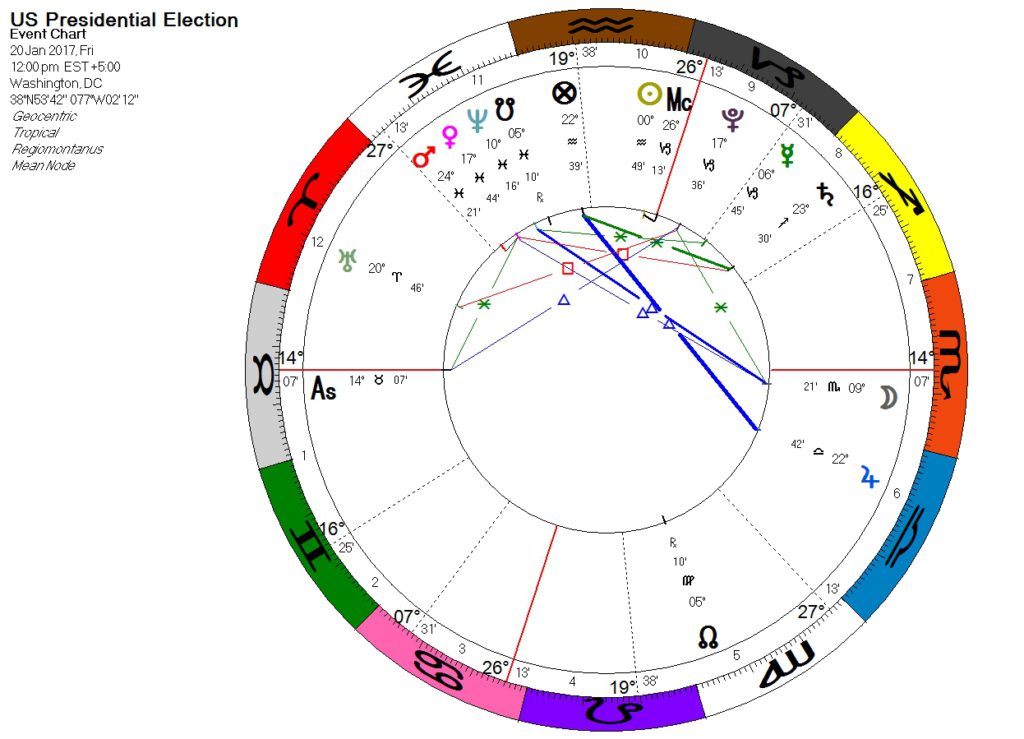 The heliacal rising star for the day is Al Rescha, the knot in the link between the two Fish of the Pisces constellation. This speaks to the nature of the nation to aspire toward a coming together, and hopefulness, to join separatist concepts into a unity of understanding. As this is linked to the energy of Taurus in the chart, this shows a hopefulness and cohesiveness in support of financial stability – the aim of the administration (whatever its means) will be on financial and land-based stability. This reflects the Venus-Neptune signification, the ruler of the chart placed in Pisces in the 11th house, as a strong albeit temporary stability both in Trump’s advisors as well as in the Treasury.

The chart has a Taurus AC and Capricorn MC, two archetypes which are strong statements for Donald Trump i.e. Wealth & Productivity, and Ambition & Legacy. Building Capricorn walls, restoring the Capricorn Rust Belt of America, shoring up a Capricorn legacy, and similar themes can be expected to inform the public actions (MC) of this administration. The lens of the administration is primarily financial and focused on protection of assets and the homeland (AC is 4th from PF, Ruler of 4th is angular, ruler of AC is 2nd from PF).

Sagittarius contains the important Sun/Moon midpoint (20° Sag), which is found in assembly with Saturn, and is square the Nodal axis and the ruler of the chart, Venus. With Taurus rising, its ruler in the 11th (and 2nd from PF), and the control that Sagittarius 8th sign possesses, we see a significant focus on financial change indicated.

I see the biggest challenge being the discord between Trump (Saturn) and his advisors (Pisces stellium – perhaps Conoway is Venus), or the Executive (Saturn) and Congress (11th house and Jupiter). The Saturn Jupiter perfected sextile following the 21 August solar eclipse, shows that the events of the solar eclipse bring the Executive and Congress working together very willingly, most likely because there will be need to access the purse strings (11th house). I will leave the reader to ascertain the nature of such an event.

The DC is associated with the heliacal setting star Capella, a star traditionally associated with and sacred to the Moon Goddesses, Artemis (Greek) and Diana (Roman). With a Scorpio Moon near this area of the chart, we get the sense of a Collective Feminine in anger, ready for revenge. This strongly aligns with the USA Pluto Return, all pointing to an administration which will preside over a nation dealing with many issues heretofore swept under the carpet. There is a concern here that things dear to the Goddess are disrespected: women and Nature (the environment) especially. It would be in the administrations best interest to do good by the women in society and the environment, else it risks its isolationist and navel gazing policies being left with no sense of internal cohesion to look at. The Moon also rules the 3rd house of the media, so both the land resources (4th house) and media relations (3rd house) encounter challenging situations with the administration. The Moon is in Fall, which is a form of rejection of these (promises not being kept). The problem comes from Mars, who is ruler of the 7th house and placed on the 12th house cusp, so these represent subversive elements and inappropriate foreign relations.

And yes, it isn’t surprising that shortly after the inauguration, there was a large uprising of angry feminists, both male and female supporters all across the country. In her book Star and Planet Combinations, Bernadette Brady writes that the impulse of Capella is “to be driven by a personal philosophy that a basic right of life is to be free”. No, you really cant make this up! Such a collective environment could very well indicate the appearance of a feminist in opposition to the administration, and this may be the main contender in the 2020 elections, marking a new era in US history. For example, Capella is a prominent star in Nelson Mandela’s chart, and he rose up in response to the collective need to rebel against the racist and separatist Apartheid regime in South Africa. Given the significations in the inauguration chart, I believe this is a sign not to be lightly brushed aside. 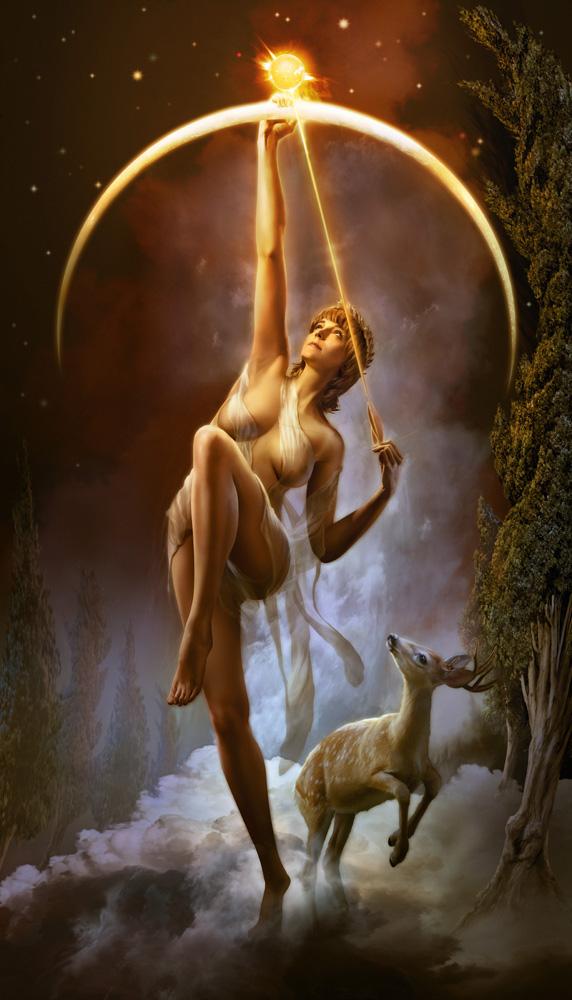 On an international level, Capella and the Scorpio Moon shows a withdrawal from trade and other major international roles, a move toward Isolationist policies. The Moon in Fall shows these policies to be unpopular, and together with its dispositor also ruling the 12th sign, indicates some of these policies are not well formulated, or lead to unforeseen surprises affecting the economy (Aries Uranus in 12th).

Speaking of the ruler of the 12th sign, Mars…this planet together with the Moon has the most influence over the whole chart in terms of essential dignity (loosely an indicator of capability to do something). This Mars is near the 12th house cusp, is disposited by an accidental malefic Jupiter (ruling the 8th and 12th houses and placed in the 6th house), and the Mars is connected to the MC where it is exalted. This shows much conflict (trade wars given the Taurus AC context) with good intentions which go awry, in turn forcing bullish financial moves to stay afloat (accidental malefic Jupiter). This is supported by an indication of high speculation (ruler of 5th is angular and financial being positioned with the PF), and the 2nd house of financial means being the 5th from PF. With the fixed star Altair (the Eagle constellation – how appropriate for the USA!) in parans with the MC at this moment – shows the involvement of the “warrior class, the bold and independent, the daredevils”.

This Mars and Saturn will likely manifest during a major turning point or “coming out” for this administration in April 2017 (secret methods haha). This manifestation will repeat mid-2019 – Feb 2020. Obviously the January 2020 Great Conjunction of Saturn and Jupiter will wrap this up conclusively. A simple signification here could be that April 2017 sees the initial emergence of a new feminist opposition which comes to prominence during the 2020 election cycle, OR April 2017 shows actions of this administration with repercussions which are significant in the next election cycle.

A lot of the other indications will manifest strongly beginning in mid-June 2017 when transiting Sun opposes radix Saturn, and will continue to play out as the Sun transits to oppose all the planets above the horizon from mid-June to end-September. Therefore, in addition to the above, I feel that the two most important mundane charts to look at for the year will be the Cancer Ingress of the Sun (21 June) and the Solar Eclipse (21 August).

We are certainly in for a political and financial ride. Maybe some isolationist policies would do the US and the UK some good. Although, you know what they say about good intentions…

For more information on heliacal rising and setting of stars and the use of parans in astrology, I refer the reader to this article.