In light of the upcoming referendum facing the United Kingdom in its decision to stay or exit the European Union, one is drawn to question the state of Europe in general now and in the years to come. I thought I would add an event date which I think is relevant to the development of the concept of a “Europe”, dominated by France and Germany, as you will see, has been the case since the 9th century AD.

I enter this event date or noon-chart to add to the ongoing discussion of mundane matters pertaining to Europe and the European Union. I welcome other astrologers testing it and having their views about it. To view larger images, Right Click and choose “View Image in New Tab” or equivalent.

In Nicholas Campion’s The Book of World Horoscopes, “the fall of the Roman Empire in Western Europe is taken as the approximate date of the beginning of the Medieval period of European history” (Campion, 436). However, a history of the early middle ages following the fall of the Western Roman Empire would actually propose a different date as the beginning of Western Europe which has persisted to the modern era.

After the fall of the Western Roman Empire, governance coalesced into the hands of the Merovingian dynasty ruling over the Kingdom of the Franks (spanning the territories of modern western Europe from France to Germany). State property was a matter of personal possession however, which led to frequent wars over inheritance for parcels of the kingdom divided between sons and heirs. In exchange for support in wars from noble families for their cause, potential heirs offered up increasingly larger tracts of land until, by the beginning of the 8th century, the title of King was mostly titular. The frequent wars had weakened royal power, while the aristocracy had made great gains and procured enormous concessions from the kings in return for their support. These concessions saw the very considerable power of the king parcelled out and retained by leading counts (in Western Frankia – modern France) and dukes (in Eastern Frankia – modern Germany). At this time, actual power had passed to one of the leading noble families under Karl (or Charles) Martel, even though he did not claim royal authority but maintained a royal Merovingian figurehead. However, by the middle of the 8th century, the last Merovingian puppet king was displaced, and with the blessing of the Pope, a new ruling dynasty of the Carolingians was set up under one of Karl’s sons, Pepin.

It was Pepin’s grandson Charlemagne, however, who is most well-known. In a move to increase his legitimacy in the eyes of nobility, and to take advantage of the lax protection afforded the papacy by the Eastern Roman Empire (Byzantium), he struck a deal with the Pope in exchange for protection in Italy. Charlemagne was crowned Holy Roman Emperor on Christmas Day in the year 800.

The clashes over inheritance and land continued to plague the Frankish kingdom, and after a long civil war over the inheritance of Charlemagne’s grandson, Louis the Pious, the empire was finally divided among three sons at the Treaty of Verdun in 843. The Treaty of Verdun is hailed as birth of Europe as we know it today. It created the concept of “nation states”. The Frankish Empire was effectively divided into an Eastern kingdom, a Middle kingdom, and a Western kingdom. 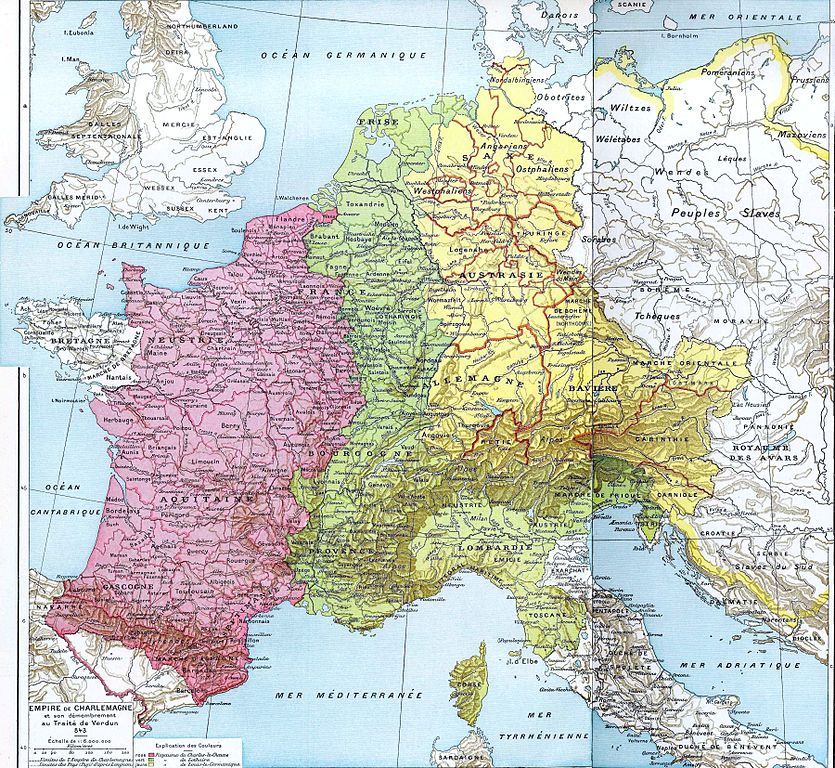 Eastern Frankia was bounded by the Middle Kingdom on its right and Islamic Al-Andalus (Spain) to the south, and hence the counts who ruled in East Frankia did not have much room to expand their lands. The result was that the counties in East Frankia fought often with one another, dividing the land and power in the region to a very high degree. Royal authority in East Frankia sat with one ruler who actually only was left controlling the lands immediately surrounding Paris. With the rise of the Capetian dynasty, East Frankia became the Kingdom of France.

West Frankia was bounded on the west by the Middle Kingdom, and on its right by open land and Slavic territories, so the Dukes of West Frankia (being far less numerous than the Counts of East Frankia) were more cohesive in their power and expansion. With the successful battles against the Hungarians in later years, the Otto dynasty of rulers arose to create what would become the Kingdom of Germany, or Prussia.

The Middle Kingdom, being but a narrow strip of land separating East and West Frankia, and containing the region of Alsace-Lorraine, was soon assimilated into either the East or West Frankish kingdoms in subsequent wars between the two. Regions in the Middle Kingdom have since always been hotly contested land between France and Germany, with peace only arriving with the forming of the European Union after World War II. The breakup of the Middle Kingdom, which also included lands of Northern Italy, placed pressure on Italian nobility to declare their independent kingdoms which arose out of the conflict pursuant to the Treaty of Verdun.

It is for these reasons that the Treaty of Verdun is held as fundamental to the formation of the main nation states of Europe, with France and Germany being key players – even to the present day.

The event chart for the Treaty of Verdun is proposed as (another) birth chart for modern Europe, which was signed in 10 August 843 at Verdun, a town halfway between Paris and Frankfurt. Please note that when using software, to make sure that the location is set to Verdun in the Lorraine region in western France, rather than the Verdun elsewhere in France (for example, to the south-west). You will notice that the Ascendant for the Inauguration chart of the European Union is conjunct the Sun for the Treaty of Verdun event date. I thought this was a strong connection between the two charts, given that we are referring to a Leo Sun connection, and we are dealing with the formation of what would become nation states on the one hand, and on the other, we are dealing with the birth of a new Union in Europe which was largely an effort to prevent economic and political wrangling between Germany and France.

The Ascendant of the Verdun Treaty chart is on the Sun of the EU Inauguration chart purely by coincidence.

The Treaty of Verdun chart has a partile Mars-Pluto square in the mutable signs Pisces-Gemini. This is mirrored by the partile Scorpio Mars-Pluto conjunction in the EU Inauguration chart. I find it interesting that the EU crisis developed as Saturn and Mars transited the Inauguration Mars-Pluto conjunction through 2014 and into 2015, with matters coming to a head in 2016 as we have the transiting Mars activating the Verdun chart Mars-Pluto square (the mutable signs have been very hot since 2014, with eclipses running through Pisces, Neptune in Pisces, with Mars, Saturn, and Jupiter adding the mutable mix!).

Transiting Pluto is activating the Uranus-Neptune conjunction in Capricorn in the EU Inauguration chart as we speak, and (depending on the time for the Verdun chart) would be pulling in the Verdun chart Capricorn Moon as well. These would surely be classical breakdown-rebuild significations for the system as a whole, but also for its people.

The Verdun chart Mercury is at the Bendings (square the Nodes) of the EU Inauguration chart. This is what first made me sit back and think that well, the contract or agreement that was set at Verdun played a definite role in the fate of Europe (and the key players of the EU).

Looking very superficially at the main astrolocality lines for the Verdun treaty chart (placing more emphasis on the parans and local space lines), one notices the Saturn line going to Berlin, that fated Mercury going through Brussels (and Brussels also picking up a powerful Node-Pluto parans), the Mars line going to Paris, and the Jupiter line going to London and down (coincidentally?) to Greece – perhaps linking the UK and Greece. I found this very interesting, just from the local space lines of the Verdun Treaty chart in 843 AD. 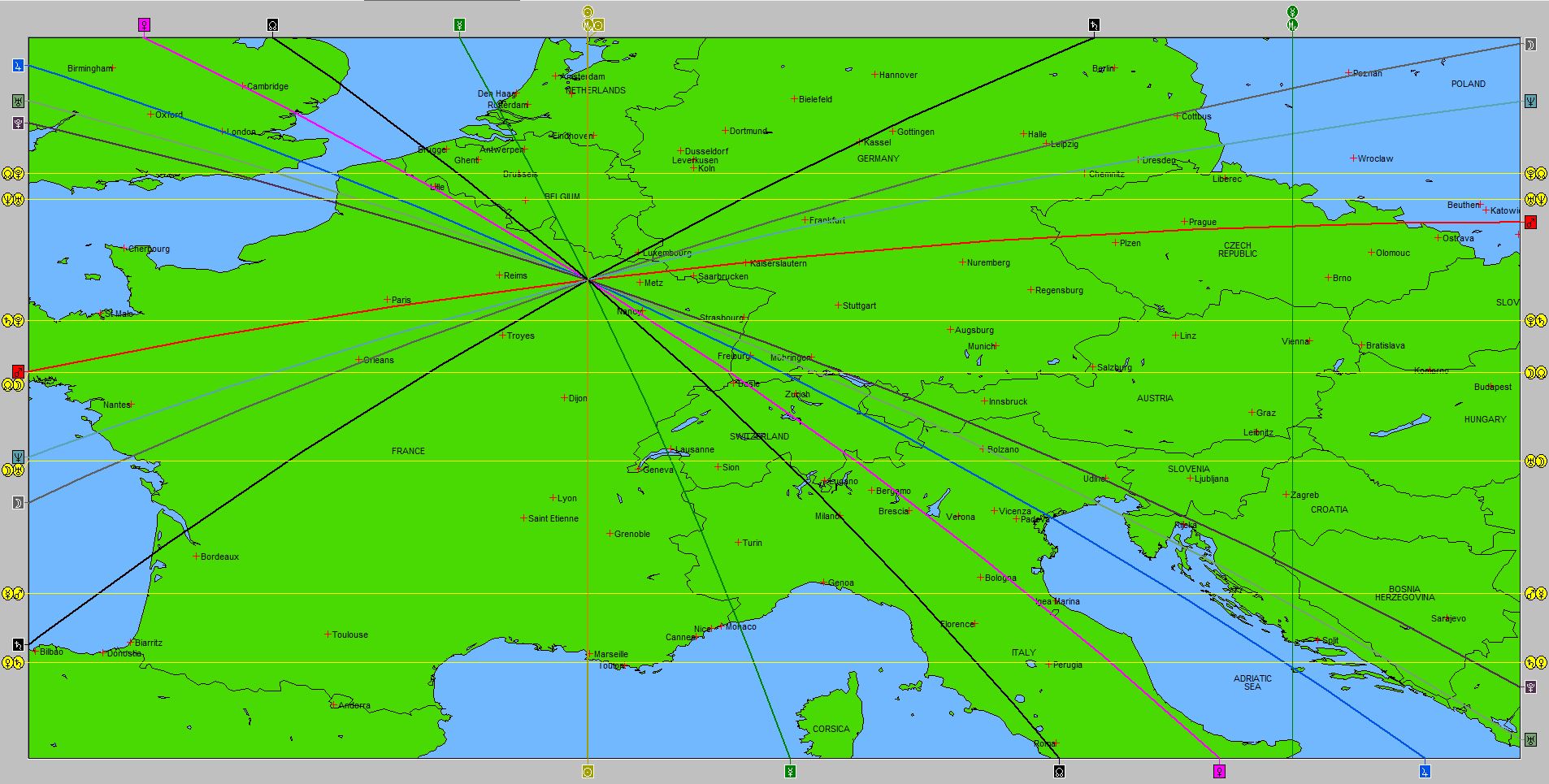 I have proposed this Verdun date for testing, as I think it is interesting and has relevant connections to the EU Inauguration chart that could be added to the conversation regarding the state of Europe as we know it. I feel that the Treaty of Verdun event date is seminal to the later formation of nation states across Europe and is therefore historically valid as well.