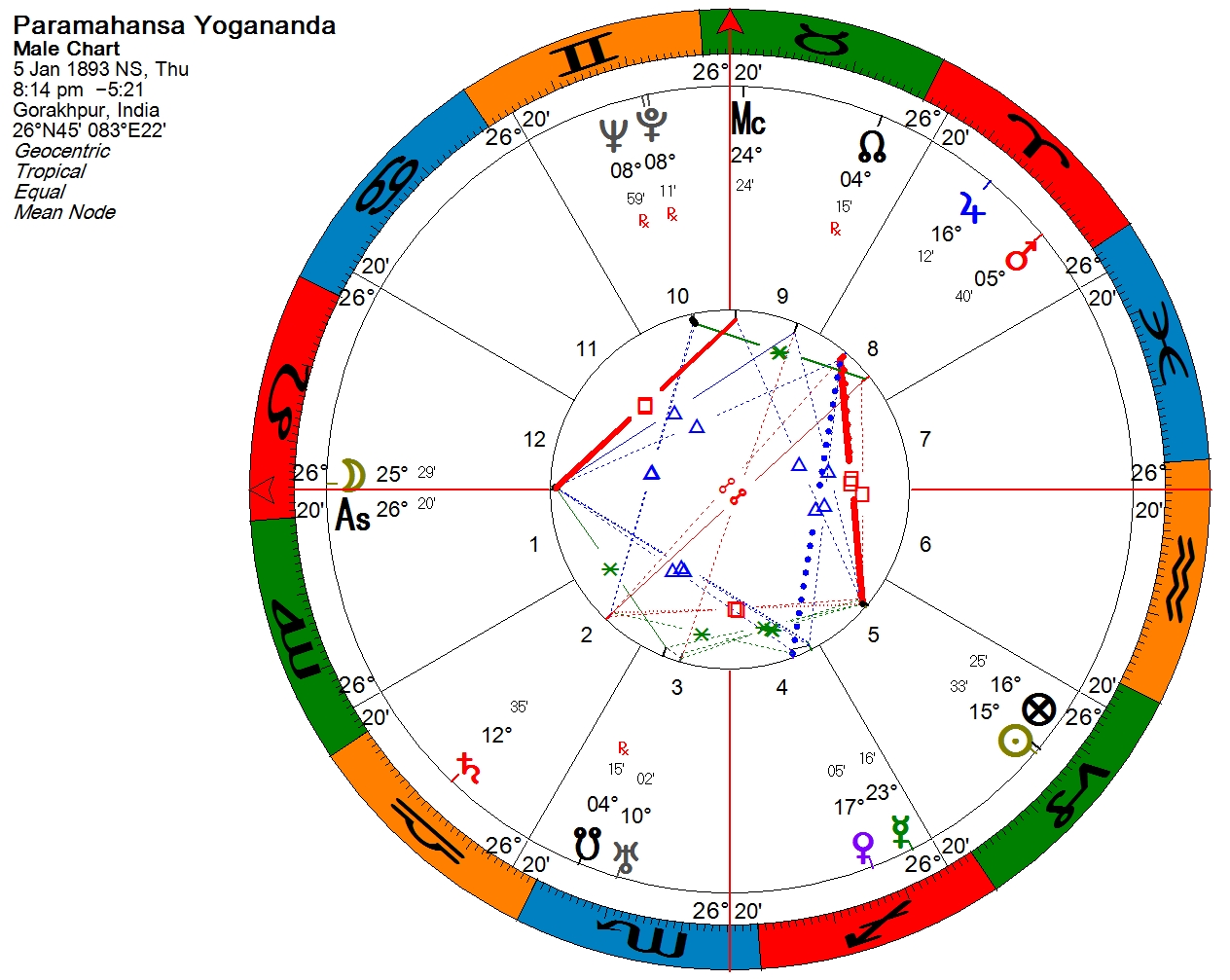 The life of Paramahansa Yogananda is well-documented in his Autobiography of a Yogi. He is credited with imparting the science of Kriya Yoga (a branch of Yoga practice related to purification of and unity of the consciousness into the spine) to the West.

In this chart, the Mars energy is highly active and strong, and is a great asset to him whatever the life journey would entail. In this case, it indicates the adoption of a pioneering view in transformative lawful pursuits (secular or religious law and philosophy) with a sense of tradition and roots – Mars Lord of the Geniture, Aries(8H/9S)<(4H+9H). This Mars is emphasized further by being at the Sun/Moon midpoint – and therefore Martian 9th house activities function at the confluence of his particular Solar and Lunar needs and aspirations.

This means that the Part of Spirit, the place in the chart dealing with the future, the place and events in life where our free will has more reign than others, and it is placed in Aries(8H/9S)=Jupiter, planet of faith, linking his spontaneous desire for pioneering change to his role as a teacher. Specifically, Aries Jupiter wishes to break down barriers to the personal impact his inspired actions may have on his environment. The ruler of the Part of Spirit is in the same sign as the Part, indicating his conception of the Divine originates from his own self (or that he is born of that Essence to begin with).

The temperament shows an excess of dryness, with some choleric tendency. As a youth, Yogananda was quite boisterous and playful and sometimes brash despite his many hours of isolation and separation from the world…he had an almost wilfulness that separated him from others his age.

The nodal axis on the 9H/3H polarity indicates the journey has an emphasis on teacher/student (someone requiring a teacher) along the conventional religious route. Note the emphasis in Self-realization Fellowship of the Guru-Disciple link.

The 9th house operates via Aries, indicating the approach to religion is highly effective (Mars in Aries), focus on quick results, a force to be reckoned with, to conquer through religious activity for the sake of freedom of action adn personal will to manifest unchallenged. Traditionally, with Mars ruling the House of the God, one would say they rebel against the conventional, which in his case was particularly true when he landed in the USA.

I should also point out that all this Martian energy helped him tremendously to fight off and dominate over the negative propaganda he received in the USA in the early years…the Aries sheer force of will definitely aided the spread of his religious and philosophical activities. In addition, the focus and emphasis through all these considerations comes back to Aries and the 9th house – and what pioneering work he DID do in foreign lands and the books published there! (publishing and foreign lands are both 9th house significations).

The Sun-Saturn square indicating his rejection of relationship or marriage from a very early age. He wouldve had many suitors but they were all rejected (the Sun doesnt accept what Saturn is giving). I guess in his case he got over it lol. Also, while the Jupiter is not heavily dignified, it is definitely supported by his Mars in the same sign – his teaching/faith (Jupiter) well supported by his Guru (Mars, L9) – his guru Sri Yukteshwar is described in Autobiography of a Yogi as being a very strict, forceful disciplinarian.

According to Robert Hand, a dignified Saturn especially in connection to a dignified Jupiter, is a mark of spiritual aspiration and potential. His Saturn is exalted and although opposed to Jupiter, they are both well connected to the Angles or places of activity in this chart to get over the compromise indicated by the opposition. The Sun-Mars mutual reception by sign is incredibly helpful. It is no doubt he acquired funds and money of others in offset to the otherwise problematic Saturn influence on his finances. In his case, as a renunciant, the exalted Saturn in the second house makes complete sense – he made it work for him.

The Pars Hyleg at 9 degrees Libra is activated by that exalted Saturn in the 2H/3S, so that the mission of his life is tied to bringing harmony through his speech and writings, which manifests also as income. It is further emphasized by Venus, ruler of the Part being in the 3rd house from it. His mission is the writing and speaking of his ideas of harmony and equality, and impressing this upon others (Libra).

In summary, we see the divinity potential already inherent in such a person, who will speak inspired truth in foreign lands in a pioneering way. That is his relationship with the Divine.