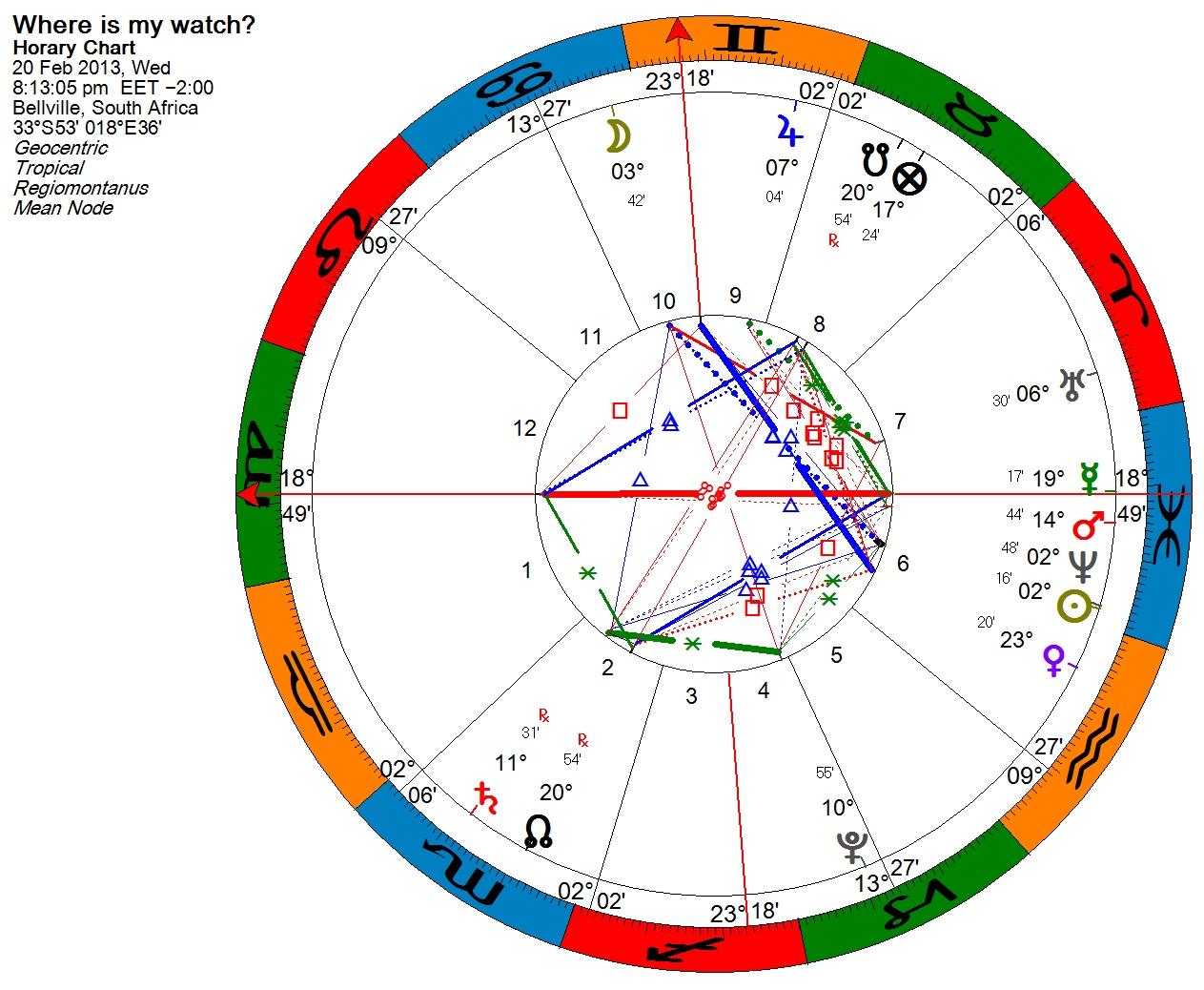 From the Sanskrit word hora (a division of time) came the Greek horoskopos (hour-marker). Horary Astrology is therefore that branch of astrology dealing with the answering of mundane, specific everyday-type questions. The question is conceived in the mind of the person asking the question, and is born in the mind of the astrologer at the moment and place they choose to consult the heavens for an answer to that question. It is a requirement that the person asking the question have a vested and direct interest in the subject of the question, and the question be formulated as clearly as possible, often times with a time-indication in the query (e.g. Will we find my son David before the end of the year?).

In any case, this was a question I conducted as an experiment with a friend of mine. I gave him my $500 watch and told him to take it home, and after work sometime in the evening I would call him, pull up an astrology chart and ask where my watch is, and proceed to tell him where he had placed it in his house.

Moon is my friend (ruler of 11th). Moon entered Cancer about 3.5 hours ago – my friend had left work (Gemini MC) around this time and was en route to his house (Cancer). Moon in 10th indicates the importance of my friend on the outcome of the issue since he is in possession of my watch.

Since he is in possession of my watch, the watch is given by the Sun (ruler of his 2nd).

My friend was comfortably around my watch about 1.5 hours ago (Sun trine Moon): he confirmed that he was in the same room as the watch around this time.

The 6th house is his 8th, so opposite his 2nd, thus indicating that the watch is in his bathroom/restroom, or the part of the house opposite to where is kitchen is.

The watch is in something (mutable Pisces). It is located between a place that has water (or in something of a Venusian nature) and near reflective surfaces (Venus in fixed air sign) and some things of a Martian nature. So that describes the immediate environment of the watch.

The watch is in what he considers to be the main room of his house (Sun ruled by Jupiter in his 10th).

So the 8th in his 10th gives a bathroom in his main room, which would suggest an ensuite, or alternatively, a main room dealing with clothes and comfort (Venus, and water signs). This led me to a bed room.

He confirmed that the watch was in a vanity case on a counter between his ensuite bathroom, his bed and his martial arts weapons. His bedroom is literally in the opposite part of the property as his kitchen.

I take the vanity case to be the Venusian object with reflective surfaces in which the object was.

The watch was located pretty closely from the chart, but relied on the feedback from my friend to fine tune the analysis. This is what would happen in such questions – feedback is very important in any type of astrology.